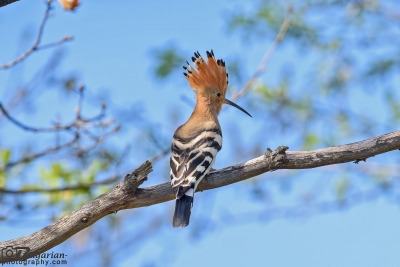 The Hoopoe is one of the most attractive birds in Bulgaria, especially with his forelock, which unfolds in fear, excitement and while landing.

Usually, can be seen walking on the ground searching for worms and insects for food. It feeds also with small lizards, snakes and frogs.

No pronounced gender and age dimorphism. In winter migrates to Africa, mostly in Somalia. The spring migration is in March-April and autumn in August-September.

In length the Hoopoe reaches 26-28cm, beak is 5-6cm and tail 8-9cm. The coloring of the body, head, chest and neck is ocher with orange-brown shades. The back and wings are mainly black coloring with wide white stripes. Wings of the Upupa epops are large up to 48sm, with a big area relatively to the body. The beak is long and curved slightly downward.

In Bulgaria is relatively widespread across the country without the high mountain areas.

Hoopoe (Upupa epops) nest in cavities of trees, rocks, stonewalls and piled stones. Reproduction starts in the second half of April and May. It lays 5-8 eggs that the female incubates 16-18 days.