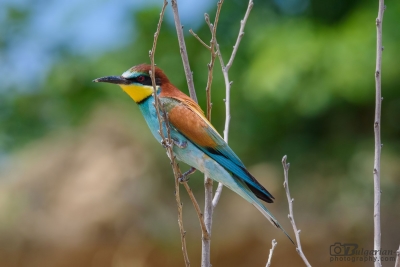 The Bee-eater is one of the most colorful and beautiful birds in Bulgaria, a favorite of photographers. Stands with bright yellow throat, almost entirely blue bottom, with yellowish-white patches on the shoulders and reddish-brown crown and back. Bee-eaters in size are as Common Blackbird but with a slim body length of 25-29 cm and a wingspan of 36 to 40 cm. There is a thin and long black beak curved down, long and pointed wings and tail often with extended middle feathers. Young birds have a paler color with green color back with no extended middle feathers.

They are migrated species, which flies from South Africa in April and migrate back in September in large flocks.

European Bee-eater (Merops apiaster) belongs to the order ciiformes and family Bee-eaters (Meropidae). Inhabits mainly in Southern Europe, Northern Africa and Western Asia. Can be found across the Bulgaria country in places with loose shores of soft soil.

Bee-eaters feed on insects captured in flight. Since bee venom did not impact these birds, they eats bees, wasps, hornets, dragonflies, butterflies, beetles and others. The main menu remains however bees, according to a study from Spain, it reaches 82% of its main menu. However, the damage is minimal because eaten bees do not exceed 1% of all worker bees. At the same time destroying many wasps, hornets and other insect pests of bees.

Makes its nest in holes made in sheer coasts and sparse vegetation, but also in the vertical pits. Holes can reach lengths up to 3 meters, and at the very end is the nest with a special expanded camera. In the absence of steep banks dig their holes in gentle slopes. The socket is made from two parents with the help of their beaks at the time of digging is disposed approximately 2 kg soil. Once the nest is done, the socket is used until the end of the life of birds. Bee-eaters are colonial birds and during nesting they care not only for their own offspring, but feed and chicks of other couples (personal observation). The female lays from 3 to 8 eggs and both parents participate in incubation. The eggs hatch in June, July for about 20 days. For about approximately a month, they are already detached and can leave the nest. Monogamous birds, but there are cases of polygamy. Upon completion of nesting bee-eater gather in flocks and prepare for migration.

Despite its beautiful plumage is actively haunted by beekeepers. In the past, some beekeepers have destroyed their nests during hatching of their chicks. Today bee-eater endangered and protected species and killing him is pursued by law. Alternative methods of chasing him from the area of the apiaries are tied strips of shiny foil and other audio and visual materials that keep the birds away.

Information: Bulgarian Society for the Protection of Birds.