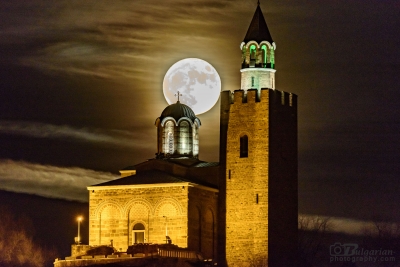 Super Moon is the phenomenon in which earth satellite appears closest to Earth (perigee) and at the same time is in full moon. Full Moon observes the Earth is exactly between the Sun and the Moon.

In November 2016 our natural satellite will officially going on perigee at 13:23 on November 14 bulgarian time, when approach only 350,508 kilometers of our planet. The moon will reach full phase two and half hours later at 15:52 pm.

According to calculations, November super moon will be 7 percent higher than normal and about 15 percent brighter. Of course, for the human eye that is unnoticeable difference.

The pictures were taken from Veliko Tarnovo against the Tsarevets fortress.