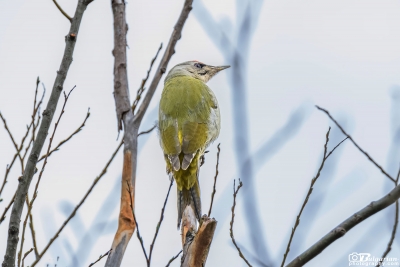 The head and neck are gray and the upper body and wings are a green color. Wings reach a length of 15 cm, body length of 25-28 cm and weighing 125-180 grams. The eyes are red, there are thin black stripes around the eyes and chin.

The range covers most parts of Central, Eastern and Southeastern Europe, North Africa, Asia Minor and the Oriental region (South Asia). It is rare in the northern parts of Europe and in France.

It feeds on insects (primarily ants and their larvae) and spiders, as well as fruits and seeds.

Song of the gray woodpecker resembles that of the green woodpecker. You can hear in the video below.

Monogamous bird. Grown one brood per year. The breeding season is May-June and then expanded its territory. Digging holes with a circular hole with a diameter of 5-6 cm average depth of 9-13 cm in the stems of deciduous trees (usually dead or rotting) of up to 5 m. Sometimes using holes of other woodpeckers.

The female lays from 5 to 10 white eggs, which both parents incubate 14-17 days. The juvenile birds stay in the nest about four weeks, then begin flying. Live up to six years.