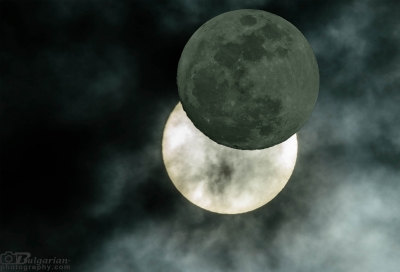 The full phase of the eclipse was visible only from the North Atlantic and the Faroe Islands.

I was able to photograph the eclipse near Targovishte, as shortly before, the fate was benevolent and thick clouds that prevailed in the sky all day break.

Generally speaking, a solar eclipse occurs when the moon passes between the Earth and the Sun hiding solar disk, ie the moon casts a shadow on the Earth's surface. If the moon hide the entire disk of the sun is observed a total eclipse, and when hides only part of it is called partial.