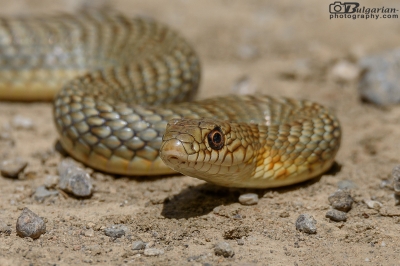 The Whipsnake (Coliber Caspius) is a type of snake, occurring mainly in the southeastern parts of Europe, including Bulgaria. It can reach up to 2.5 m in length. It's not poisonous, but it bites hard when it's threatened.

The Coliber Caspius is spread across much of the Balkan Peninsula, except its northwest areas. It also meets north of the Danube along its lower reaches, in Southern Ukraine and Moldavia, in the southern part of the Don and Volga basins to the Caucasus to the south and northwestern Kazakhstan to the east. It is also found in the Aegean islands, northern Turkey and an isolated region in northern Hungary. In Bulgaria it is distributed at an altitude of 1100 m, missing on the northern slopes of the mountains and the high fields in the western part of the country.

The Whipsnake inhabits steppe and rocky places, bushes and rare forests, as well as arable land. It is active during the day by climbing well on trees and shrubs. Its main food is rodents, lizards, other snakes, small birds. In mid-summer, females lay 6 to 18 round eggs of about 45 mm in size. The shooter flies winter alone or in a group of several dozen specimens in cavities in the soil or rocks. Winter sleep usually lasts from the end of October to the end of March, but sometimes some animals come to the surface and earlier when the weather is sunny.