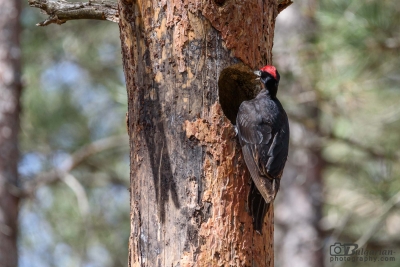 The Black Woodpecker, though included in the red book is not so rare in Bulgaria as written in the books, at least according to my observations. Personally, I've seen a dozen Black woodpeckers in Veliko Turnovo region for half a year, unlike Grey Woodpecker, from which I have seen only 2-3.

The Black Woodpecker is a very spectacular bird especially flying from tree to tree. Like a small Batman who flies into the woods. However, this is the largest woodpecker in Bulgaria in sizes up to 55 cm in length and wingspan of up to 80 cm. This amid the forest where trees are close together, to watch this bird flying is a very impressive. By the way, the Black Woodpecker is the bird with the longest tongue in Europe - over 12 cm.

Not that the dredging of its hollow in the tree is less spectacular, especially when the male throws sawdust, which you can see below in the gallery and video.

Black woodpecker, as is evident from its name is black in color with red forehead, crown and nape, while the female have red nape only. Young Black Woodpeckers have a slight brownish tinge.

It inhabits coniferous forests mainly, but also deciduous. Definitely, much more likely to encounter this bird in coniferous than in deciduous forest.

Wintering in Bulgaria, as the couples leave for a long time together, probably for life.

The breeding season starts in mid-February to mid-March. It lays in April (3-6 eggs), hatch about two weeks, and young woodpeckers take off a month after birth. Breeds again if the young birds died.

Nesting hollow is carving in a tree trunk with a diameter of about 40 cm and a height of over 4 m.

The food includes beetles, bark beetles, larvae and ants, as well as seeds. Besides the trees, The Black Woodpecker feed itself on the ground also usually around the base of trees and stumps.

Unfortunately, the tree that Black Woodpecker digging in the gallery was cut exactly in the period in which inside had to be the younger generation. I'll spare you the words for this act because they are worse than swearing of shepherd with a hangover.