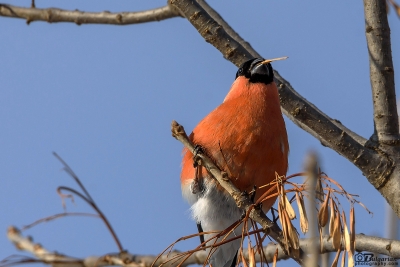 Personally, for me, this is the most beautiful bird in Bulgaria and my most favorite. Minted a prominent fashion designer has made color of males birds. Very nice combination of colors.

Bullfinch (Pyrrhula pyrrhula) is a small songbird of the order passerines. Occurring in the territory of Bulgaria, where lives permanently. Relatively rare bird, considering that during the warmer months lives high in the mountains and the number is not particularly large nationwide. In winter, however, can be seen much more frequently.

Size is like a house sparrow and has a pronounced sexual dimorphism, the male is colored more brightly and has a reddish-orange skirt, the color varies slightly depending on the season, both sexes are black upper part of the head. The beak is short and massive.

It inhabits almost everywhere in Europe except southern parts of the Iberian Peninsula and in some places in Asia. It inhabits the mountainous coniferous and mixed forests, but in winter, during my wanderings, descends into the plains and visited deciduous forests, parks, gardens and courtyards of settlements. During the winter specimens from other European countries arrived in Bulgaria, so in the winter Bullfinch can be seen more frequently.

It eats seeds of trees, some green parts of plants, buds, fruits, insects and spiders.

Bullfinch are monogamous birds. Young males usually in February separated from his family and began to sing attracting females, after a long courtship by the couple formed, it most often goes for life.

Nesting begins late April, early May. The nest is 2-5 meters high at the end twigs atop the tree. It is well woven hemispherical outside with coarse and fine inside with straw and twigs. The female lays 5-6 whitish sparsely flecked with rust spots eggs incubate for 12-24 days, during which time the male feed her. Nests annually. Young birds stay with their parents until the next breeding season, and sometimes then forming family groups of several couples.

On the territory of Bulgaria Bullfinch (Pyrrhula pyrrhula) is considered an endangered species and the capture, sale and killing and are prohibited by law.