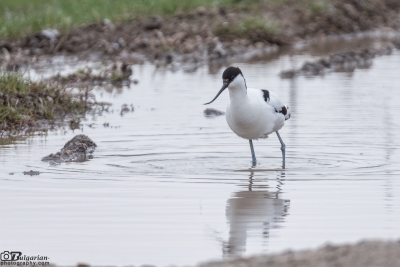 For the first time I was fortunate to see this rare bird on 19 March 2018 near the village of Obedinenie, Veliko Tarnovo. Driving the car, I noticed that a white bird landed in a pond on the road ahead of me. This road is poorly used, so I lowered and approached very slowly with the car. I saw that it was Pied Avocet, and I was very happy to finally see this bird, shoot it and make a video. This is a great rarity. These birds can be observed in central Bulgaria only when migrating.

Shortly thereafter the bird flew and landed on the adjacent field with another Pied Avocet. I followed it on foot, but I scared them. The two birds flew off and made a few circles above me, issuing warning sounds.

Unfortunately, the weather was very bad and dark and the photos did not get very good.

There is a characteristic bent up beak. The plumage is predominantly white. The head and the tips of the wings are black, and the back and top of the wings have longitudinal black strips. The legs are relatively long, light blue in color. There is no pronounced sexual dimorphism.

It is mainly found in Atanasovsko Lake, Pomorie Lake, Poda Protected Site, Shabla Tuzla and other wetlands along the Black Sea coast. During the migratory period it can be encountered near the country's inland waters, as in my case. Individuals remain in Bulgaria during the winter

Winters in the Mediterranean and Africa. Spring migration is in March-April, and autumn - in August-October.