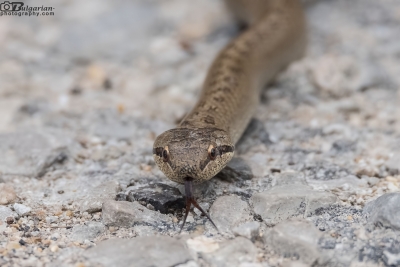 The Smooth snake is a non-venomous snake of the family Colombridae, spread in much of Europe and the Middle East.

The length reaches 65 cm, in very rare cases - up to 90 cm. The color is gray, sometimes with a brownish tinge, but there are also shapes with a beech red color. On its back there are irregular dark spots, resembling the slightly it resembles viper snake, which is often confused. It easily differs from other snakes on the dark strip that passes through the eye. Another significant difference from the viper is the round pupil.

It is spread all over Europe. It also occurs in northern Turkey, the region of the Caucasus, northern Iran and western Kazakhstan. In Bulgaria is spread across the country to an altitude of 1600 m.

As can be seen from the pictures and video, the snake is not aggressive, although I repeatedly banned the escape route to shoot it.