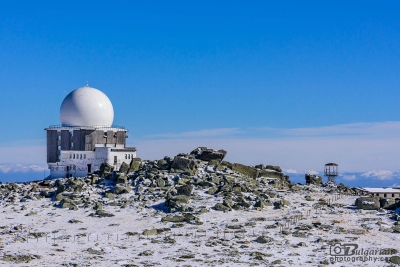 Cherni vrah (Black Peak) is the highest point of Mount Vitosha. Its altitude is 2290 m. The peak is a smoothed meadow, which has the shape of an irregular ellipse, about a hundred meters long, over which rise six groups rounded stone heaps, piled symmetrically from the south, west and north.

Vitosha is the only domed mountain in Bulgaria. The domed shape of the mountain emphasized by its highest peaks, located close each other - Reznyovete and Cherni vrah. Part of Vitosha Mountain declared as a nature park - the first in Bulgaria and the Balkan Peninsula (declared in 1934 as a national park). It includes two reserves - "Bistrishko branishte" and "Torfen reserve".

This was my first track in Vitosha, as the goal was to reach the Cherni vrah. I started my track from "Bai Krastio" locality, which shortens my climb to the top in order to have enough time to take shoots.

The climb was not too difficult, and once I left the woods at Goli vrah (Naked peak), it becomes easier because the way to the peak is relatively on small slope.

After about three hours of walking and taking photos, I reached the top of Vitosha Mountain. Cherni vrah peak itself resents a large flat platter.

On the way to the peak, however there are amazing views of Sofia and from the Cherni vrah opens magnificent views of the Rila Mountain and to the highest peak in Bulgaria - Musala.

The date was October 25, 2015 and there was not much snow for over 2000 meters altitude. Despite the clear weather conditions, the photography conditions were not so good, especially when I reached the peak at noon.

After an hour of taking photos and eating at Teahouse on the top of the Cherni vrah, I started my journey back to my car.